Christian Benteke’s stunning 95th-minute volley snatched a 2-1 win for Crystal Palace at Brighton on Monday to ease fears the Eagles could be dragged into a relegation battle.

Brighton are still looking over their shoulders at the bottom three after a night that summed up so much of the season for Graham Potter’s men.

The Seagulls had 25 shots to Palace’s three and nearly 75 percent possession, but failed to make it count in front of goal.

Roy Hodgson’s side were without the talismanic presence of Wilfried Zaha due to injury, but Jean-Philippe Mateta made an impact on just his second start since joining on loan from Mainz.

Jordan Ayew’s cross from the right allowed the Frenchman to back-heel home on the turn and claim his first Palace goal on 28 minutes.

The visitors were then pinned back as Brighton dominated, but Neal Maupay, Adam Lallana and Leandro Trossard all wasted chances.

When the hosts did equalise 10 minutes into the second period it was thanks to right wing-back Joel Veltman’s first goal for the club.

Pascal Gross’ low shot was blocked by Palace defender Tyrick Mitchell as he battled inside the box with substitute Danny Welbeck and fell kindly for the Dutch defender to sweep home left-footed.

Palace then clung on for a point until completely against the run of play they snatched all three deep into stoppage time.

Andros Townsend’s cross beyond the far post did not seem to pose any danger until Benteke connected flush on the volley to send the ball into the far corner. 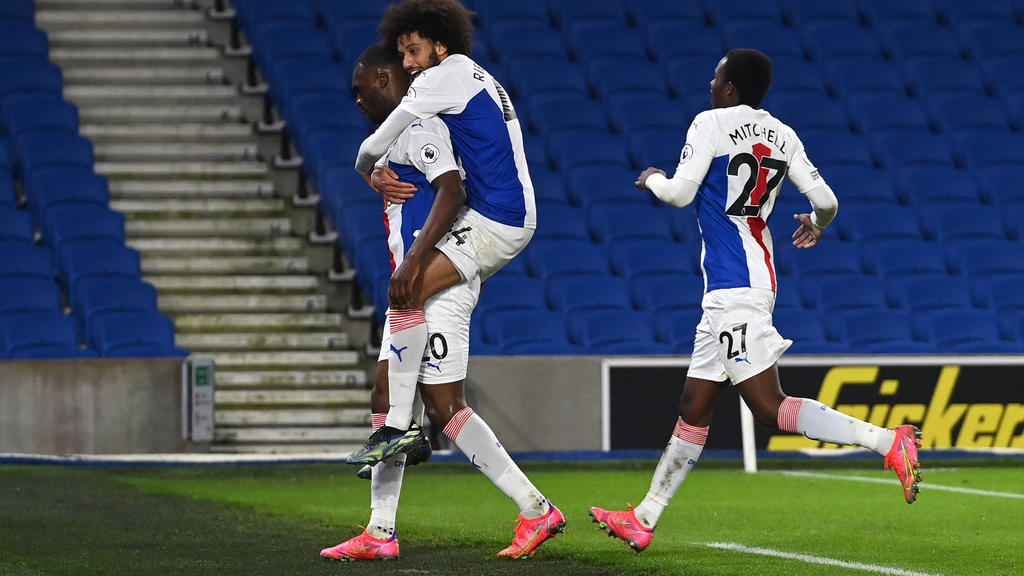 Rangnick says Lingard farewell snub is ‘part of the game’